2021 will mark roughly 100 years since the time when Fr. John Nolan of Kirkcubbin began documenting in manuscript form his understanding of Nolan family history. This is essentially the understanding reflected in the Nolan book “O Nolan – The History of a People” published in the Millenium year.

Recognizing the value of Fr. Nolan’s contribution in the 1920s and the need for a repeat of such an effort today, I am challenging myself to document for future generations the current – 2020s – understanding of Nolan family history in a freely-accessible online Nolan family history book.

A tentative title for the new book is ” A Fresh Look at the Nolans – a People from most Ancient Times to the Present” and you can already view online the outline and draft of the new book . You can also Email me to provide comments or to offer assistance.

END_OF_DOCUMENT_TOKEN_TO_BE_REPLACED

In 2017 when I retired from my position as Newsletter Editor for the Nolan Clan I redirected my energies towards the re-implementation of the NolanFamilies.org website using the more popular WordPress development platform thereby making the website more easily manageable and maintainable.

All parts of the 2004 legacy website have now been re-implemented except for the Archives section which currently provides a Family Stories database, a Nolan Memorials database and a few reference files of interest to Nolan researchers .

As a retired senior with multiple commitments and obligations I will be slowly improving the Archives section until 2025 or thereabouts when I hope to transfer management of the website to a new webmaster.

END_OF_DOCUMENT_TOKEN_TO_BE_REPLACED

Simultaneous with the 1916 Easter Rising in Ireland were several
other world events that still reverberate today: World War 1, the Russian revolution, the breakup of the Ottoman Empire, etc.

This traumatic era split families and friends, allegiances. Nolans were no exception with members on all sides of the questions.

The Nolan Clan reaches out to the worldwide Nolan diaspora and asks anyone reading this Blog posting and having information about a Nolan family member during the troubled 1916 time period to submit it for inclusion in the Clan’s historical archives.

Many Nolan families have connections to events related to the Rising. We hope to hear from Nolans at home in Ireland or wherever else the winds have taken us.

Many thanks to David and Orla Nowlan of Dublin for suggesting this project and for the fascinating story of David’s great, great uncle James Nowlan, first president of the Gaelic Athletic Association which played a significant role in the events leading up to the 1916 Easter Rising.

You may add to the collection of 1916 era anecdotes by sending any information you might have directly to myself (Chris Nolan ).

James Nolan of Kenyon Street, Nenagh, an anti-Treaty soldier was killed on Monday August 14, 1922, when a mine he was planting at Nenagh Barracks exploded prematurely. The dead man was a 32 year old father of one.

Patrick Nolan of Rathbride, Co. Kildare,
member of an anti-Treaty guerrilla-style cell was captured with 6 other members in Kildare on December 13, 1922 and taken to the Curragh Military Detention Barracks in Co. Kildare for trial. 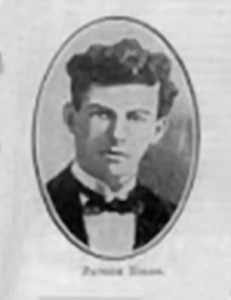 Sentenced to death, Patrick and the others captured with him were duly executed by firing squad at 8:30AM on December 19th at the Curragh Barracks.

The day before their execution, the men were allowed to write letters to their families. Thirty-four year-old Patrick Nolan penned a final letter to his mother and father. He hoped that they would
bear his death with “the Courage of an Irish Father & Mother.

A shorter letter to his younger brothers and sisters asks that they remember him and his comrades on Christmas only a few days away.

A memorial to the men executed on December 19th is located in Market Square in Kildare town with their names listed as follows:

Private John Nolan of the Railway Protection Corps was shot dead on Bride Street in Dublin on March 15th 1923. Aged 29 years, married and with5 young children, he was stationed at Wellington
barracks.

Martin Nolan, Ballywilliam, New Ross, of the Kyle Flying Column, was one of four members of his group killed on March 23rd 1923 after being pursued.

James Nolan of the Irish Volunteer Training Corps (or the GR’s) died in Dublin. This Corps of soldiers was the first to suffer fatalities in the Rising. On Monday April 24th the GRs left Beggar’s Bush Barracks and marched to Ticknock. On completion of the exercise they marched back to Beggar’s Bush where they came under heavy fire from the Rebels who kept up continuous shooting from the corner house at 25 Northumberland Road and Haddington Road.

Patrick Nolan, Boland’s Mills, served in “A” Company, 3rd Battalion, Dublin Brigade. Born in 1895 he died on the 12th of April 1979. He fought at Boland’s Mills, on Grand Canal Street and along the Dublin and South Eastern Railway Line between Westland Row and Lansdowne Road. He also fought during the War of Independence and remained with the National Army up to 1924 being a Lieutenant with the Mechanical Transport Corps.

George Nolan, Marrowbone Lane, served in “A” Company,  4th Battalion, Dublin Brigade, fighting on Marrowbone Lane throughout Easter Week.  On the day of the surrender he was ordered by Con Colbert to deliver letters to Fathers Kiernan and Eugene at Mont Argus and after delivering the letters he was not to return to Marrowbone Lane, as a result he was not interned after the Rising. In 1917 his Company was reorganised and he fought throughout the War of Independence. At Christmas 1920 he was recruited into a full time Active Service Unit and took part in several attacks on British personnel including Colonel Winters and the burning of the Customs House.

Michael Nolan, Enniscorthy, served in “A” Company, Enniscorthy, Wexford Brigade. Aged 47 years old at the time of the Rising, he fought at the Athenaeum, Saint John’s Mill, Cooperative Road and Slaney Road Enniscorthy and at Manor Mills Enniscorthy. He joined the Volunteers at their inception in Enniscorthy in 1913 and was also a member of the I.R.B. Arrested at his place of work on Tuesday the 2nd of May, he was taken from Enniscorthy to Waterford and then to Richmond Barracks Dublin before being deported to Stafford. He was released from Stafford on May 17th 1916. He had no further activity with the Volunteers or I.R.A. and did not take part in the War of Independence or Civil War.

Bartley Nolan served as a Volunteer in the Castlegar Company of the Galway Brigade, Irish Volunteers. Aged about 20 years old during the Rising he fought at Carnmore Cross, Agricultural Station Athenry, Moyode and Limepark County Galway. He went on the run after the Rising and was captured on May 9th. He was released from Frongoch Prison at the beginning of August 1916 and re-joined the Volunteers on reorganisation in 1917. He took no part in the Civil War. 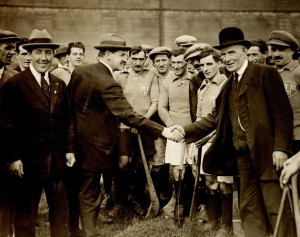 In this picture taken at Croke Park on Sunday, 11 September 1921, the Dublin hurling team looks on, as a very happy Harry Boland smiles directly at the camera and Michael Collins shakes hands with James Nowlan (1862–1924), GAA president, Sinn Féin representive and Kilkenny Alderman. Less than a year before on 21 November 1920, British forces had stormed  into Croke Park during a match, killing 14 civilians.  Less than a year later, on 2 August 1922, Boland was dead from a gunshot wound and 20 days later, on 22 August, Collins was assassinated at Béal na Bláth.

James Nowlan was a member of the Gaelic League, a lifelong supporter of the Irish language revival movement and a supporter of Sinn Féin from its founding in 1905. He was President of the Gaelic Athletic Association from 1901 to 1921. He held that position for twenty years – making him the longest serving GAA president.
Following the 1916 Easter Rising, Nowlan was arrested by the British and interned without trial in Frongoch, Wales. In August of that year he was released. He publicly voiced support for the Irish Republican Army during the Anglo-Irish War. Nowlan Park, the GAA stadium in Kilkenny, was renamed in his honour. He is buried in Glasnevin cemetery.

At about 6.30pm on July 26, 1914 along Bachelors Walk beside the Liffey River the King’s Own Scottish Borderers (KOSB) returning to the Royal Barracks (now Collins Barracks) were confronted by a hostile crowd of about 600.

When the KOSB had reached about 100 yards of the Ha’penny Bridge, the crowd was right behind them at which point the soldiers were ordered to block the street. They fired on the crowd. Four people died and many more were injured, including John Nolan of 44 Cabra Road, Dublin, who received a bullet wound to the leg.

On 24 February 1917, at Buckingham Palace, King George V honoured Louisa Nolan just 18 years old with the Military Medal for her actions during the 1916 Easter Rising in Dublin.

According to the Sinn Féin Rebellion Handbook, she tended to wounded officers and men during the battle on Mount Street Bridge.

Official British casualties accounted four officers and 216 other ranks killed or wounded during the engagement at Mount Street. Seventeen Volunteers had taken up defensive positions in buildings along the street. Four Volunteers escaped through the rear of the buildings evading capture.

Louisa Nolan was the daughter of the former head constable of the Royal Irish Constabulary (Ireland’s police force before 1922). After the Rising, Louisa Nolan moved to London where her two sisters were nurses. Her two brothers were in the British Army and Navy respectively. A third brother was killed in August 1916 on the Western Front during World War I.